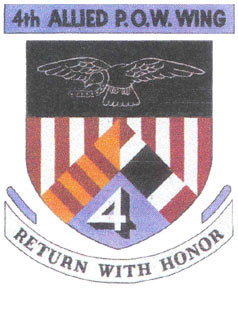 Shortly after the Vietnam POWs were released in 1973, the Joint Chiefs of Staff were to be given a formal debriefing as to what went on in North Vietnam during the men’s captivity. Colonel John Peter Flynn, the SRO, was to be the briefing officer. Flynn called Hervy Stockman, one of the POWs and asked him to design an emblem to represent the group. The idea for the design of the emblem was Hervy’s.

He finally settled on the current design with the flag colors of the United States of America, South Vietnam and Thailand. The idea of the “4th” referred to the 4th war...WWI, WWII, Korea and Vietnam. “Return with Honor” was the Code of the prisoners – We all go home with honor – or no one does. Hervy faxed the design to Colonel Flynn, who had it reproduced to be added to his briefings.

The emblem represented, in the first briefing before high ranking U. S. Government officials, a solemn symbol to honor and commemorate the men and women who served as POWs in China (5); North Vietnam (472); South Vietnam (262); Laos (31) and Cambodia (31).